﻿"It takes a very special kind of person to establish a new system for establishing and managing organizations, and [Jackie Cochran] was that type of leader." (from an interview with former WASP Jean McCreery)﻿

﻿SEPTEMBER 28, 1940: ﻿Cochran wrote to First Lady Eleanor Roosevelt, her friend, to address her idea of a women's flying division in the Air Force, as U.S. citizens were preparing for the impending war. Cochran felt qualified female pilots could do the domestic, non-combat aviation jobs to release men for combat. ﻿ 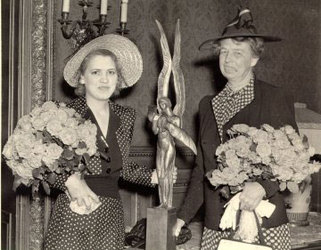 Courtesy of Liberty Letters
﻿SEPTEMBER 1, 1942: "This is not a time when women should be patient.  We are in a war and we need to fight it with all our ability and every weapon possible.  Women pilots, in this particular case, are a weapon waiting to be used" (Eleanor Roosevelt's "My Day" newspaper column installment). 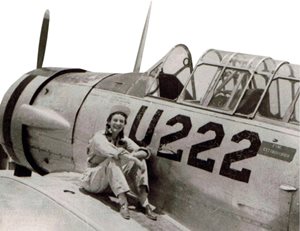 WASP Bee Haydu, Courtesy of Ready54.org
According to Bee Haydu, Cochran trained these girls tirelessly because, "She wholeheartedly believed that women could function as well if not better than men in what was viewed as 'men’s work'" (Interview with WASP Bee Haydu). "We not only had to be as good as the men cadets... we had to be better!" (Interview with WASP Jean McCreery)
﻿"I'm very happy that we've trained a thousand women to fly the Army way...I think it's going to mean more to aviation than anyone realizes" (From a speech given by Jackie Cochran).﻿

"Jacqueline cochran was a visionary; a determined, persistent leader, who never really took 'no' for an answer" (from an interview with wasp specialist nancy Parrish)